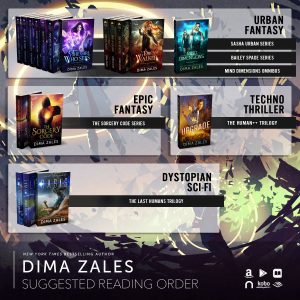 Bailey is a dreamwalker on a mission to save her mother’s life, taking any gig she can get…if the price is right. When a gorgeous illusionist sends her on a curiously lucrative job, Bailey’s life changes forever. Think your dreams are private? Think again.

Sasha is a talented illusionist who receives the opportunity of a lifetime. When things go terribly wrong, she is thrust into a world of vampires, werewolves, and other mystifying creatures. Only then does she realize her true nature.

Theo is a resident of Oasis, the last habitable area on Earth. But is it really the paradise it appears to be? An action-packed dystopian adventure set in a post-singularity future.

An urban fantasy/sci-fi series featuring Darren, a snarky pseudo-genius who discovers his unusual ability to freeze time may be only the beginning.

A captivating tale of intrigue, love, and danger in a world where sorcery is entwined with science.

An intense new techno-thriller that pushes the limits of what it means to be human.