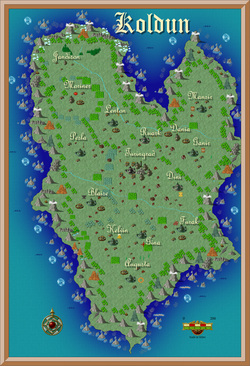 I am super exited about the book coming out on Monday. In the meanwhile, here is a little excerpt to hold you over. Also, I am proud to present the map of the land of Koldun!

Gala stared at the tall, broad-shouldered man who was her creator, trying to figure out the best way to answer his question. She found it difficult to focus, her senses overwhelmed by being here, in this place Blaise called the Physical Realm. Her body was reacting to the different stimuli in strange and unpredictable ways, her mind attempting to process all the images, sounds, and smells so she could understand everything.

One particularly strong distraction was Blaise himself. She couldn’t stop looking at him because he was unlike anything she had seen before. Something about the angular symmetry of his face appealed to her, resonating with her in a way she didn’t fully comprehend. She liked everything about it, from the blue color of his eyes to the darkness of the stubble shadowing his firm jaw. She wondered if it would be acceptable to reach out and touch his hair—those short, almost-black locks that looked so different from her own pale strands.

First, though, she wanted to answer his question. Concentrating, she thought back to before, to what had happened prior to her experiencing reality for the first time. “I remember realizing that I exist,” she said slowly, trying to put into words the strange sensations at the beginning.

“You mean you existed for a time without realizing it?” he asked, his dark eyebrows coming together slightly. Gala thought that expression likely meant confusion because her own eyebrows did the same thing when she didn’t understand something.

“It’s like there were two ways I existed,” she tried to explain. “One way would just happen. This went on longer. When I say I realized that I exist—that’s when this other part of me first realized that I am me. These parts are not separate; in fact, they are the same thing. There is a strange looping arrangement between the two parts that I don’t fully understand and don’t know how to put into words—”

“I think I do understand,” he said, leaning forward and staring at her intently. “You became self-aware. At first, you existed on a subconscious level, and then, at some critical threshold, you achieved a conscious state of being.” He appeared excited, Gala thought, somehow finding the right word to describe her creator’s emotional state.

“What is the difference between a conscious and a subconscious state?” she asked, hungering for more information.

“In a human being, the subconscious parts of the mind are in charge of things like breathing or the heart beating,” he said, his eyes gleaming brightly. “When I run, my subconscious figures out the complex trajectories of how my limbs move. Some sorcerers also think dreams form in that part of our minds.”

“I am not a human being,” Gala said, looking at him. That much she knew now. She was something different, and she needed to learn what that something was.

He smiled—an expression that made his face even more fascinating to her. “No,” he said softly, “you’re not. But you definitely seem like one to me.”